I missed the memo about impractical independence. 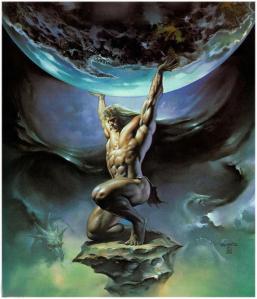 Being self-sufficient is a beautiful thing, but carrying the weight of the world on your shoulders without any help, ever, is kinda dumb and turns out to be kinda inefficient, most of the time.  To illustrate this point, and with apologies to my husband, I’m going to tell a story that makes him feel like an asshole, but it’s a cautionary tale for us all.

A few years ago, my husband was scheduled to go on a business trip to France, lucky dog.  I was doing a fellowship with the court at the time and enjoying luxuriously long civil-servant lunch breaks.  I therefore offered to come home on the day of the trip and drive my husband to the airport shuttle stop, which was just a couple of miles from our place.   My husband repeatedly refused my repeated offers, as he didn’t want to inconvenience me.  (Seriously, I thought one of the reasons that people got married was so that they were always assured a ride to the airport, but I suppose my husband missed the memo about that.)

Cut to…the day of the trip, I’m sitting in the courthouse cafeteria when my husband calls me to let me know that he is on the airport shuttle bus.  I noted a hint of self-satisfaction in his voice for having successfully gotten to the shuttle stop all by himself.  We chatted for a moment and then I asked him, in jest really, “You’ve got your passport, right?”  There was a sickening silence on the line as it dawned on both of us that he was now hurtling down the 405 freeway, captive in the shuttle bus, while his passport lay forlornly on the kitchen counter in our apartment.

With all due haste (i.e., driving like a crazy person, literally dodging a train, etc.) I went home and got my husband’s passport and then plotted the intercept course to meet him at the airport so he could make his flight.  I suppose it was kinda like being on “The Amazing Race” but without the awesome cash and prizes.  Luckily, the traffic gods smiled upon me and I made it to the airport, handed off  the passport, and said au revoir to my husband in time for him to catch the flight.

Given my anal-retentive tendencies, I am pretty sure that had he permitted me to just meet him at home and give him a lift, I would have given him a thorough pat-down to ensure he had all the mission-critical stuff, including his passport.  So instead of making the short round trip between the courthouse and home, I instead made the much longer and circuitous journey of courthouse, home, airport, courthouse.   So much for not inconveniencing me.

The lessons from this mishap were many:

1.     First and most obviously, let your wife give you a ride.  It really is no trouble.

2.    Second, when someone offers to do something for you, there’s usually something in it for them, so don’t feel bad.   It’s a form of enlightened self-interest, I think.  In this case, I wanted to give my husband a lift, because doing so would have made me feel like a good wife, and would have given me an opportunity to micro-manage the last moments before he left home, and I live for that shit.

3.    Lastly, trying to be completely self-sufficient makes for a fair amount of misery and mayhem.  Conversely, opening up and letting other people help you sometimes not only lightens your load, but it can also make you more humble, more appreciative, and more connected.  Lucky, huh?  Just listen to  Babs, she knows everything and sings it all beautifully…