I missed the memo about sighing, Santa, and sucking it up.

I sigh a lot.  And groan.  And roll my eyes.  I do all manner of inarticulate gestures which communicate my displeasure, impatience, and frustration.  And I make these gestures at my kids.  I think I had rationalized that my little, alright, big sighs, were somehow better than actual words of displeasure, impatience, and frustration.  But then my 5-year-old clued me in that all my sighing was probably turning him into a crazy person.

See, my 5-year-old is no dummy and he has come to understand that the loud exhalation of air from my lungs means that he should probably head for the hills.  But rather than just hightailing it out of my sight, when he hears me sigh, my sweet boy asks me what is wrong.  And what is  really wrong is that the 5-year-old is doing the asking instead of the 40-year-old just “using her words” to make sense out of whatever is irritating her.  A sigh leaves my darling son to wonder what could be bothering me, and worse, to wonder if he’s bothering me.  He hears the sigh and thinks, “Uh oh, what’d I do?” And so often, I’m sighing because I’m overwhelmed by the baby pulling my glasses off my face while the cat nearly kills me by walking right under my feet as I am trying to get the baby out of the carrier because I am trying to get the bathroom since I have to pee really bad and the whole time the 5-year-old is talking, talking, talking (about Christmas, mostly.)  In that moment, I’m not sighing because the 5-year-old has misbehaved, I’m sighing because the Universe is forcing me to take a deep breath.

I think I’m more aware of my sighing these days because I’m doing more of it.  Because Christmas.  I’m not one of those people who joyfully welcomes all the extra stuff that comes with the Christmas season…that crap is work and I already have a lot of work to do.  But I’m trying to remember that every time I sigh or roll my eyes, a little bit of my son’s childhood evaporates.

And here’s the thing, for all my wordless complaining, in spite of myself, I do find at least some joy in the all the extra Christmas crap.  I present Exhibit A: 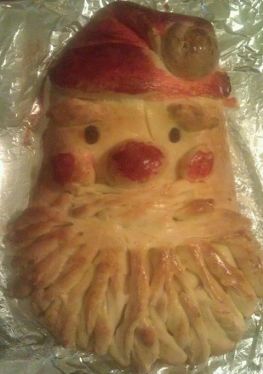 Kind of on a dare, I made a Santa face out of bread.  Because Christmas.  And even though this took some time out of an already busy day, after I was done, I was happy to have made the effort. 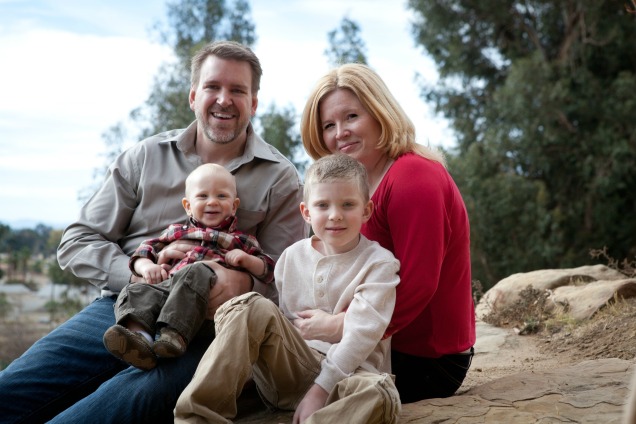 My perfect family Christmas card photo.  That I had to figure out what everyone was going to wear for, figure out when we could meet the photographer, get the cards ordered, get the envelopes addressed, etc., etc.  There was a significant amount of sighing involved in this production, be assured. But in the end,  I love this picture and I’m tickled I get to share it with my nearest and dearest this year.

So instead of sighing all the time, I’m trying to suck it up a little more.  My kids will only be little for so long, and when they’re grown up, I’ll be  sighing wistfully as I think about the sweetness of this time with them.  At least I hope so.

Today, may all your sighs be sighs of contentment.  Merry Christmas and memo received.

3 thoughts on “Sighing, Santa, and Sucking It Up”