So I’m going to start with something that though seemingly small,  seemed like a big deal to me. I did not get the memo about Greek yogurt.

After years of trying various brands of yogurts, sweating their various shortcomings in texture, flavor, and nutrition, I finally happened  upon one of those “eat this not that” type articles that suggested Greek yogurt as an alternative to the alternatives.

So…I bought some and it was love at first spoonful. Creamy, dense, tangy…and available in a variety of delicious flavors. It has more calories and fat than most other formulations, but packs the nutritional punch of lots of protein, calcium, and all those active cultures that make your intestines happy.

And my reaction was…where have you been all my life? I’m hooked. Breakfast, snacks, dessert…anytime is a good time for Greek yogurt. This got me to thinking…why had I never clued in to the existence of Greek yogurt? I live in a huge metropolitan area and have darkened the door of many a Trader Joe’s and Whole Foods, which carry several brands of Greek yogurt. Now I’m noticing that it’s also in the dairy case at more mainstream super markets as well. What made me always reach for the more familiar brand-name yogurt? Was I brainwashed by advertising? A yogurt xenophobe? What gives?

So now Greek yogurt is a mainstay on my grocery list, big deal, right? Well, kind of. It’s a big deal because now I’m thinking about the cost-benefit analysis that accompanies a lot of choices. And I’m also thinking about how I’m usually on auto pilot when it comes to making a lot of decisions. Auto pilot is awesome, it saves a lot of energy, but every once in a while, it’s good to fly by sight. So Greek yogurt as a metaphor for self-determination? Memo received.

So, to get me started I thought it might be useful to think about the types of memos I’ve missed, and I think the most useful way to classify them is by how I’ve reacted when I finally did get the memo. In my humble estimation, there are four types of memos: 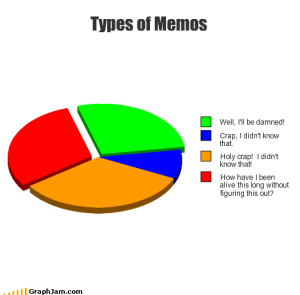 Some memos are just funny little moments of insight, some are disappointing, some are delightful, and some are actual revelations. As a I wax on about the memos I’ve missed, I’ll try to take stock of what it meant at the time, what it means now, and tell you all the stuff that occurred to me along the way.