I missed the memo about “Mom Jeans”.

You’ve probably seen that hilarious SNL sketch, and when I first saw it, I was laughing on the outside, but crying on the inside.  Even before I was a mom, I think my denim preferences veered dangerously into mom jeans territory.   I have a hard time finding jeans that are flattering and unfrumpy because even when I’m at my fighting weight, I have a mid-section that can best be described as “Homer-esque.” 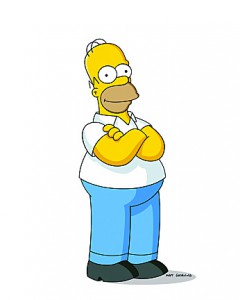 I tend to have a perfectly imperfect roundness which starts in the belly region and extends all the way around to my ass.  On cartoon characters, it’s cute, but on me, not so much.

When the very slinky low-rise jeans became fashionable, I nearly surrendered to the frump.  “Muffin top” does not begin to describe what’s going on when I attempt to wear low-rise jeans.  I think a more apt description would be “banana bread.”  And even when skinny, I’m kind of modest.  And I like to wear underwear.  And I get cold easily.  For all of these reasons, low-rise jeans are just not for me.

But check this out….

Here’s the impossibly skinny Keira Knightley wearing impossibly low-rise jeans on the left (I mean really, is that zipper like, 2 inches long?  OK, stop looking at her crotch, it’s getting weird…)  And on the right, Ms. Knightley is wearing jeans that go waaaay up.

Am I nuts or does she look pretty cute in both pictures?  These are two very different looks and each may have suited the occasion for which she chose them.  And in my life, there are sadly fewer and fewer occasions at which it would seem appropriate to show almost everything south of my navel and north of, well, you  know.

My angst about jeans and many other fashion questions has led me to worship at the altar of Stacy and Clinton.  On their show, What Not To Wear, they almost inevitably  recommend mid-rise jeans.  Not so low that people can finally find out if the carpet matches the drapes, but not so high as to risk strangulation.  Somewhere in the middle probably looks and feels best.  In life and in denim, the path to enlightenment is along The Middle Way.  Memo received.