I missed the memo about the Tragedy of the Commons.

The Tragedy of the Commons refers to the phenomenon where there is a communal resource that is sustainable only if everyone using it takes only their share, but where each person uses more than their share because they think their extra bit of consumption won’t make a difference. You can see where things start getting effed up if everyone operates under this assumption.

It’s not surprising that the most well-known article about this phenomenon was penned by an ecologist, Garrett Hardin.  In about 10 seconds, you could probably think of 10 examples of how our individual short-sightedness has led to overuse, depletion, or extinction in our natural world.    It’s an interesting quirk in human thinking that we can convince ourselves that our little contributions to big problems don’t make a difference.  But all of those little contributions are what create the big problems, capice?

In recent days, I’ve been thinking about the flip side of the Tragedy of the Commons.  Where there’s a incomprehensibly big problem out there in the world, it can sometimes be hard to see how my teensy tiny contribution to the solution could possibly help.  But what I fail to consider is the collective effect of my teensy tiny contribution, and yours, and that guy’s, and so on.

Even when I consider my teensy tiny contribution to a solution by itself, I just can’t be cynical or hopeless. I just can’t.  I have to believe that I can help, even if it’s  just a little.  My friend Rachel recently reminded me about “The Starfish Story.”  You know you know it…the guy’s walking along the beach as the tide is going out, tossing starfish back into the surf.  A passerby observes this and comments that there are miles of beach and countless starfish, so he couldn’t possibly make a difference. The guy picks up another starfish and tosses it into the water and says, “I made a difference for that one.” 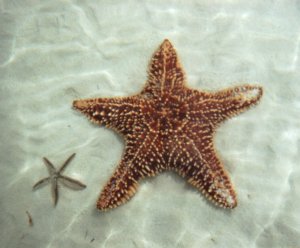 You probably see where I’m going with all of this.  Today I was sad, but not entirely surprised, to read this article  which reported that fundraising for the recovery effort in Japan is off to a slow start.  The theory is that because Japan is perceived as such a strong country, they don’t need as much help.  But that’s crap, isn’t it?  Think about when a football player takes a hit and gets knocked on his ass.  This guy’s a  dazzlingly capable athlete who could probably levitate off the field just by flexing his glutes.  All the same, one of his fellow players will extend a hand and pull him up.  Because it’s the gracious, right thing to do.

I wonder if people are also ambivalent about  giving  because they don’t know how their small contributions could make a difference in light of the scale of  the disaster.  But when someone gets knocked down, you pick them back up.   And if we all pull together, we get Japan back on its feet.  Memo received.