I missed the memo about having babies. 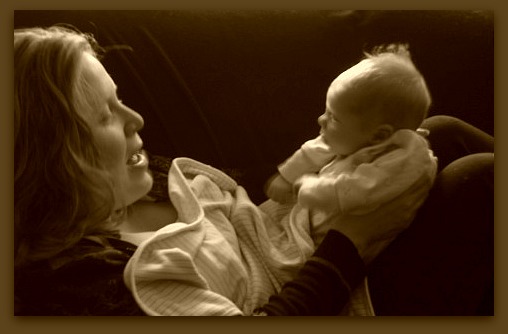 I mentioned in a previous post that I found a nice guy and settled down some time ago.  What I didn’t mention is that we were married nearly 10 years before we finally took the plunge and decided to have children. Having married relatively young, we had the luxury of fooling around for nearly a decade before certain biological and logistical pressures started to really kick in.

Both my husband and I were kind of ambivalent about children, but we had never said to each other, “Let’s not have kids.”  Kids were always out there in the nebulous ether of “someday.”  But I didn’t want to be one of those women who turns 40 and says, “Oh crap, I forgot to have kids!”  So in the summer of 2007, we pulled the goalie and I braced myself for the infertility that was sure to afflict me as a 30-something, over-educated, white woman.

About six weeks later, I locked myself in a stall in the ladies’ room at Target and peed on a  pregnancy test that I had purchased moments before.  (Yeah, I’m that impatient…that’s a whole ‘nother stack of memos…)  And you guessed it…pregnant.  Shocked, awed, and pregnant.

About two weeks after that, I started to bleed.  Even though I hadn’t had much time to get attached to the pregnancy, my grief at the prospect of miscarriage was immediate, desperate, and awful.  It was in that moment that I finally acknowledged to myself how much I really wanted this baby and it literally took my breath away.  Inconveniently, but mercifully, I turned out to be one of those pregnant ladies who bleeds for no apparent reason.  My pregnancy continued with few complications and my son, Atticus, was born in April of 2008.

When I say I missed the memo about having babies, I think what I’m really saying is that I was vainly and stupidly presuming that all of the clichés about having kids somehow didn’t apply to me.  I was smug and dismissive about the overwhelming love people professed for their kids.  It just seemed terribly sentimental and I just didn’t get it.

And then I went and won the baby lottery.

Atticus is the total package…healthy, handsome, robust, smart, sweet, and relatively well-behaved as little kids go.  Even as I sometimes struggle with the mundane aspects of motherhood, I marvel at how insanely lucky I am that I get to be this kid’s mom.  Now I’m one of those saps I used to roll my eyes at.  And that’s fine by me.  Memo received.