I missed the memo on old age, optimism, and omphaloskepis. 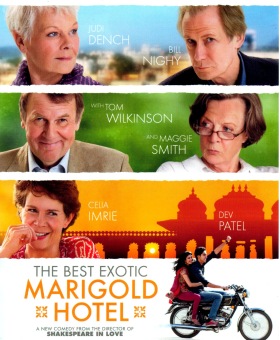 All week, I had been psyched to see The Avengers with my husband, but he got shafted into working all day.  Sucks for him,  but I wasn’t going to let pre-arranged babysitting services go to waste, so I figured I’d still go to the movies on my own.  But instead of swashbuckling superheroes, I spent my afternoon with a fairly attractive bunch of geriatrics (that description applies to both the actors on the screen and most of the audience.)

The Best Exotic Marigold Hotel features every elderly British actor you can think of and they’re all amazing.  The characters are in turn sad, sweet, sage, and even sexy.  These are people who are coming in to the homestretch, so to speak, and have found themselves in a dilapidated hotel in India trying to make sense of their long lives and find happiness in the time left to them.

I’m getting to the point in my life where the idea of old age is starting to feel very, very real.  When you’re a kid, you can’t even fathom what it would be like to get old, but now I can sort of glimpse it.  The Best Exotic Marigold Hotel offers an interesting vision of what the  “golden years” could be like, and one of the recurring themes is one of irrepressible optimism:

This gem is offered up by the character of Sonny (as played by Dev Patel of Slumdog Millionaire fame) who is the hotel’s proprietor.  Not much is going right for Sonny, except true love, but he is a great spin doctor for himself.  He has an adorable way of rehabilitating even catastrophic news in order to find the bright side.   Sonny is optimistic almost to the point of delusion, but y’all know how I feel about hope, so this is the kind of crazy cheerfulness I can really buy into.

But the little aphorism that’s quoted throughout the film goes beyond optimism, I think.  It’s the idea that maybe, if things are a real mess, the universe gives you enough time to sort them out.  Or maybe, if it is the end, and things are still a mess, you find the grace to accept the mess and be okay with it.  Either way it works, it sounds pretty good to me.

And that brings me to omphaloskepis, which is the practice of staring into one’s navel in order to achieve a meditative state.  As this blog probably illustrates, I navel gaze quite a bit, not so much to meditate, but just to try to figure stuff out, and maybe just amuse myself.   It’s a skill that will come in handy when I’m an octogenarian living in India.  Memo received.