I missed the memo about Petrels, persistence, and The Princess Bride.

Back in the fall of 1990, I did just about the craziest thing I have ever done.  I applied to exactly one college and then casually went about my life as a high school senior.  I was  a fairly strong student (*cough* nerd) so it’s not like I didn’t have at least a few options.  Because I checked the little box on the SAT forms which invited all the glossy brochures from various institutions of higher learning, I was able to get at least superficially acquainted with lots of really good schools.  Somehow, though, Oglethorpe University (Ogle-what?) just stood out.  There were lots of tangible factors which made Oglethorpe attractive to me, but ultimately, I characterized my choice as kind of cosmic.  It just felt right.  Lots of my fellow Petrels told me similar stories.  We were like Richard Dreyfuss in “Close Encounters” ….we saw visions of neo-Gothic buildings and we just had to come.

At this point you may be asking yourself, “What the hell’s a ‘petrel'”?  It’s a kind of bird that I had never heard of before, either.   Indeed this was part of Oglethorpe’s charm…the mascot is the Stormy Petrel, and it’s a distinction which usually lands it on “Top 10 Weirdest Mascots” lists. Maybe you have to experience the place to appreciate this, but just trust me, having this tenacious little creature as the totem for Oglethorpe is amazingly apt.

Another Oglethorpe-ism that I especially love is the university motto:  Nescit Cedere. It translates to “He does not know how to give up.”  I always thought this was kind of bad ass.  To be constitutionally incapable of giving up…that’s like, Steve McQueen- in- Papillon-tough.

As a Petrel, I thought that I was pretty special in that I had somehow been endowed with this admirable brand of tenacity, but then my husband and Sonic the Hedgehog had to come along and pee in my Wheaties. 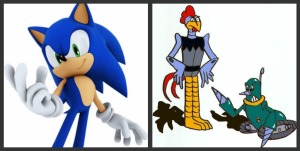 My husband pointed out that it’s more courageous when you do know how to give up, yet still persist.  He may have a point.   And then there’s Scratch and Grounder, Sonic’s nemesi …after being frustrated yet again in their efforts to capture the crafty Sonic, they have this existential exchange:

Grounder:     Sometimes I wish Dr. Robotnic hadn’t made us so persistent.

Oh, snap!  I suppose there is a point where persistence veers into stupid.  And then sometimes stupid veers into heroic….


If The Princess Bride isn’t one of your all time favorite movies, then I think it’s best that you and I just part ways here…